On Ilkley Moor without a hat

We are now in England, staying in our nephew’s flat in the small Yorkshire town of Ilkley.

Ilkley is a spa town and civil parish in West Yorkshire, in Northern England. Approximately 12 miles north of Bradford, the town lies mainly on the south bank of the River Wharfe in Wharfedale, one of the Yorkshire Dales. The parish has a population of around 16,000.

The town center is characterized by Victorian architecture, wide streets and floral displays. Ilkley Moor, to the south of the town, is the subject of a folk song, often described as the unofficial anthem of Yorkshire, “On Ilkla Moor Baht ‘at“. The song’s words are written in Yorkshire dialect, its title translated as “On Ilkley Moor without a hat.”

Yesterday (May 5) was a “Bank Holiday” (similar to the US Federal Holidays) and it was also Ilkley Carnival Day. The carnival itself (fair, rides, games, soccer tournament, noisy rock bands) was centered on the rugby grounds close to the river but the highlight for many was the parade through the middle of town. It had a pipe band, a brass band, an Air Force Cadet band, several cyclists (the Tour de France will pass through Ilkley in July) and hundreds of kids in costumes representing local activities and functions. It certainly wasn’t the Rose Parade but, on a beautiful warm and sunny day, it was a very pleasant way to spend an hour – and to raise money for local charities. Last year the Carnival attracted a crowd of 10,000; not bad for a town with less than twice that in total population, and a number that was expected to be exceeded yesterday. 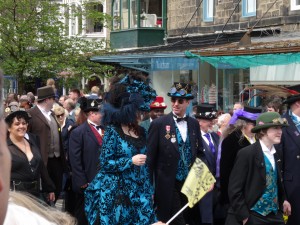 Ilkley residents in their finery 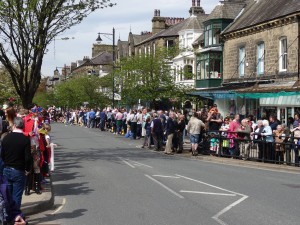 Ilkley is a popular place to visit but it’s not usually this crowded! 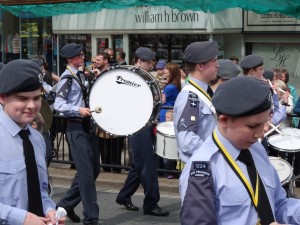 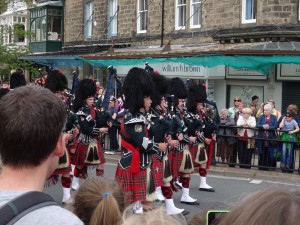 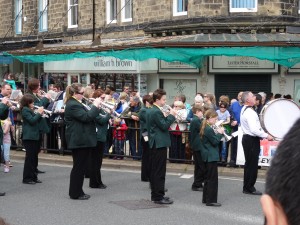 Brass Bands are very common in the North of England 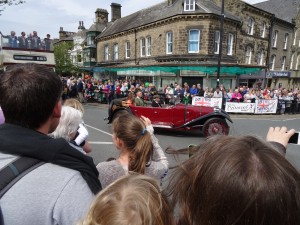 Presumably the Grand Marshall – with local dignitaries atop the bus

Robert (Bob) Hillery was born in England and emigrated to the United States in 1966. He and his wife Molly have lived in the US since that time and, for the past 43 years, in Ohio.
Both are retired and enjoy traveling,and have visited all 50 states and more than 50 countries around the world.

Permanent link to this article: https://tykesabroad.com/ilkley-carnival-may-5-2014/