The Smokies and Nashville

Get out your World Atlases and turn to the page for New Zealand as we are spending just over three weeks in this beautiful country. It was a long series of flights to get here but we are now fully recovered and have just completed our sixth day in country.

For our two full days in Auckland (the capital city) we used the Hop on/Hop off bus to see many of the more famous sites in this city of 1.5 million (one third the population of the entire country). Since this is our fourth visit, we selected places to visit that we had missed earlier – specifically, a superb aquarium, the Anglican Cathedral and Parnell Village, a restored street of Victorian homes now mostly boutique shops and cafes. 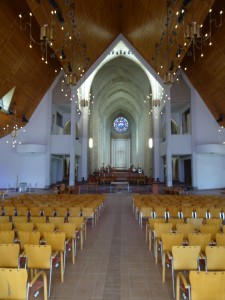 Of course, we did re-visit the 1000 feet high Sky Tower (although we resisted the bungee jump from the top and were unable to get a dinner reservation in its revolving restaurant) and the superb Auckland Museum, as well as walking the attractive waterfront area near the old Ferry Building. We also climbed Mt Eden (actually only the last quarter mile from the bus park) which, at 600 feet, is the highest “mountain” in the city. It is one of 48 extinct volcanoes in the city and there is a magnificent well-formed crater which is viewable from the top.

Auckland sits on a narrow (about 7 miles at the minimum) piece of land between the Pacific Ocean and the Tasman Sea and, although it is difficult to separate the various stretches of water seen in every direction, from Mt Eden we could see both of these Seas. In addition, this is a perfect location to view the modern city with the Sky Tower dominating the skyline of modern buildings.

Auckland also has its share of good restaurants and we sampled three in this stay. We will be back for two more nights at the end of our driving tour.

From Auckland we drove north to spend three nights in Whangerei. This is a part of New Zealand that we have not seen before and it is extremely picturesque. There are beautiful stretches of coastline, forests with dozens of varieties of trees (many unique to the country) and miles and miles of green farmland – with cattle, not sheep!

One of our primary reasons for traveling north was to visit the Waitangi Treaty, considered the most historic place in New Zealand – the Birthplace of The Nation. It was here in 1840 that a treaty was signed between Queen Victoria’s emissary (Hobson) and many (but not all) of the Maori Chiefs; the birth of the nation but the beginning of over a century of contention, wars and demonstrations. The major problem was in the “translation” of the English version into the Maori language and the degree to which Britain would have sovereignty, and how much of their home and rights the Maori would be relinquishing. Depending on your point of view, this could be put down to difficulties of translation and word meaning – or it could be a deliberate slanting of the terms to facilitate the agreement and the signing.

It should be pointed out that the Maori had some years earlier asked the British for some form of alliance to help with trade and to keep other Europeans, particularly the French, from attempting a takeover. So, by 1840, there was a similar mood on both sides and the treaty was signed right here on the beautiful promontory overlooking the Bay of Islands. Unfortunately, the actual terms soon became clear to the natives and war erupted which extended to various degree until the end of the century and simmered well into the 20th Century. It wasn’t until 1995 that Queen Elizabeth signed an official apology to the Maori Nations for the events initiated in her predecessor’s reign 150 years earlier.

This seems to have gone a long way to healing the wounds and, as we have observed, the Maori and Europeans seems to live in harmony with the natives assimilated into the more western culture. However, as the informative video at this site pointed out, there are still lingering issues, particularly over what jurisdiction the Maori will have over what was once their land; so all is not perfect.On the other hand, “Perfect” could be used to describe the physical beauty of this site on a warm and sunny spring afternoon and we thoroughly enjoyed our visit.

On Monday our destination was the region on the west coast in which there are forests containing the Kauri tree. The Kauri is in many respects of size and age similar to the California Coastal Redwoods and, as with the Redwoods, was seriously over-harvested and is now a protected species. Unlike the Redwoods, the Kauri is a very strong timber and is particularly beautiful in furniture. It also has a sought-after gum which is sold as New Zealand amber in jewelry and art objects.

We first visited the Kauri Museum to learn a little about the tree and its history as well as its importance to the country. We learned (or at least were exposed to) much more! The museum (privately operated) was vast and not only told us all we needed to know about the tree but had many exhibits dealing with the life of pioneers in this part of the North Island.  Much like the Coastal Redwood area in the US, the Kauri are now found primarily in protected groves through which pathways have been made. In fact, as the root system of these trees is very fragile, strict measures are taken to keep visitors on the paths and, in addition, we were required to pass through a disinfectant as we entered the groves to avoid the inadvertent transfer of soils, etc that might be damaging to the Kauri.

The largest living Kauri tree (which we saw at our last stop) is said to be 2000 years old and has a girth of over 40 feet and a total height of about 160 feet. This falls short of the largest Redwoods but is nevertheless a most impressive specimen. Almost of as much interest, however, is the whole area in which these trees now stand, in that they are surrounded by dozens of other species of tree and fern. We had seen many of these near the roads in our driving of the past two days but it was very pleasant to be able to walk through such a variety of foliage, most of which was quite different from anything we see at home.

Today (Tuesday) we left Whangerei and drove south about 250 miles to Rotorua, where we will be for the next three nights. This is one of our favorite spots in New Zealand and we are looking forward to seeing the mud pools, geysers and steam that are at just about every turn in the town and surrounding area.

Robert (Bob) Hillery was born in England and emigrated to the United States in 1966. He and his wife Molly have lived in the US since that time and, for the past 43 years, in Ohio.
Both are retired and enjoy traveling,and have visited all 50 states and more than 50 countries around the world.

Permanent link to this article: http://tykesabroad.com/new-zealand-auckland-and-the-north-country/